A place for pics and tutorials on making Soft Kit (clothing and accessories like buckles and cloak pins).

I recently finished up a new ranger belt! I have had this large Rus Viking buckle from Viking Leathercrafts sitting around my workshop for literally YEARS now, so I was really glad to finally put it to good use. I felt it had a very Gondorian/Numenorean (and by extension, Dúnedain/Arnorian) feel. The arched shape was reminiscent of the Weta Narsil pommel, as well as a number of the buckle shapes they used on various characters from Gondor. Personally I've become very fond of this general shape, and my explanation for its apparent ubiquity is that it probably evolved from a stylized tree motif (the best example of which I feel is probably the Fable Blades interpretation of Anduril: http://www.fableblades.com/Photos/Anduril/Anduril%20(9).JPG
Anyway, it's also quite a large buckle. The bar fits about a 1.75" strap, but the main opening actually fits up to a 2" strap, so I got myself a 2" belt blank and notched it to fit. This thing is HEFTY, and I love it!
I knew I wanted something that evoked the same general feeling as Aragorn's belt in the New Line movies without being an exact copy. One thing I definitely knew was that I wanted it to have a slightly shorter tail, because my Aragorn belt kind of flops around between my knees a bunch when I'm trekking in it, which I find irritating, so I made this one several inches shorter.
I've been using my own replica Aragorn belt as my main Ranger belt for a while, and other than the aforementioned flopping, I really like it - but I wanted something unique to me that wasn't a replica, but that still fit in with the design language established for the Rangers of the North, so I chose to decorate it with a repeating star motif. I know a number of people here feel the star motif is a bit overdone, and also probably too much of a dead-giveaway in terms of embellishment for ranger garb - I just happen to really like the design, so I decided to incorporate it anyway. I used a slightly concave diamond shaped stamp (just a super basic one from Tandy), and rather than try to hit it with a mallet (which I tried, but it kept bouncing and screwing up the stamp-mark), I managed to press it in with a table vice. It worked surprisingly well once I figured out how to get it clamped down without shifting! Then I went in and added a little detail by hand with a stylus.
Finally, I hand distressed the belt somewhat to give it a slightly worn and used feel, and dyed it up with Eco Flo gel antique.
Anyway, here it is! Can't wait to wear it on my next outing! 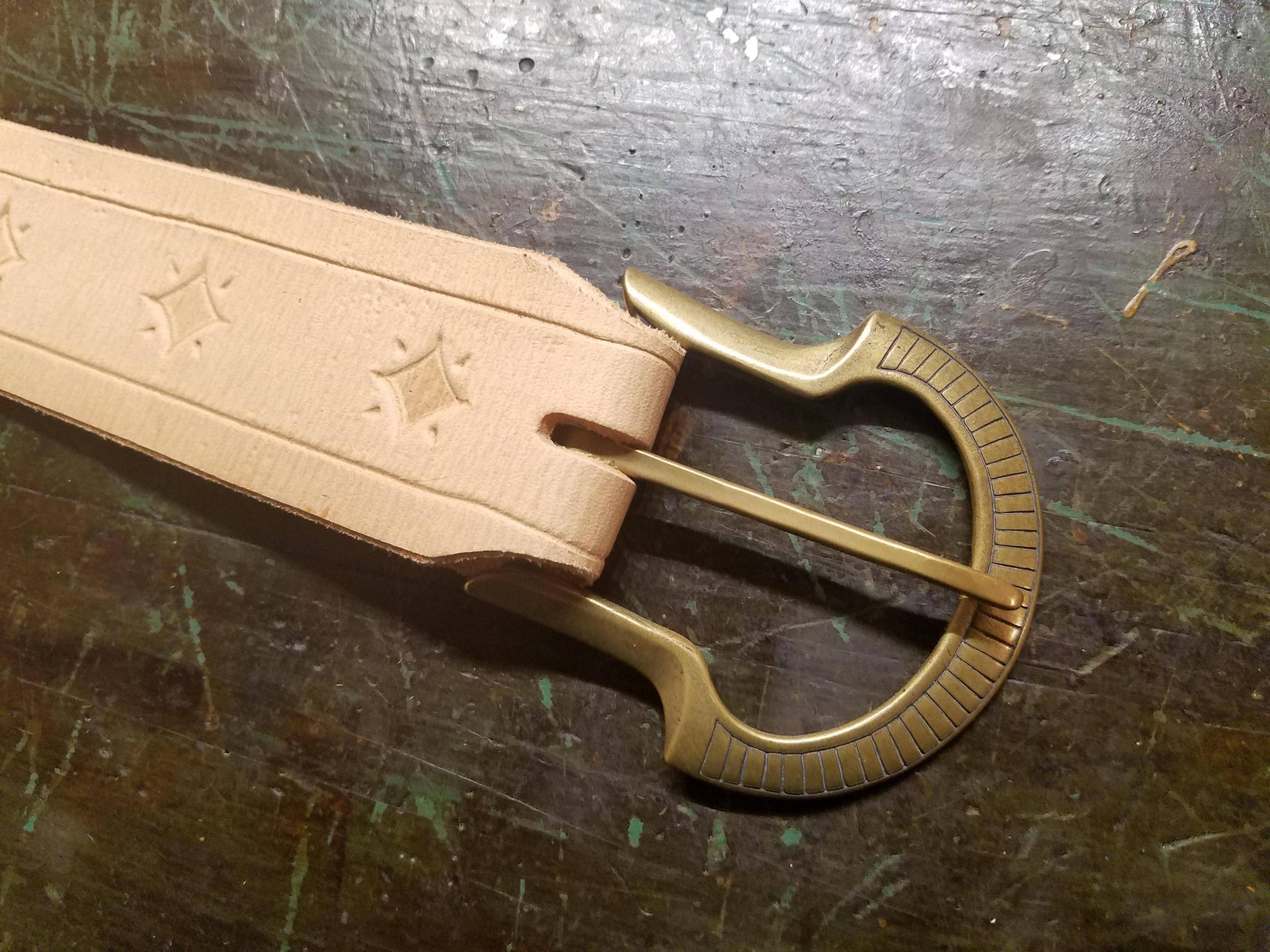 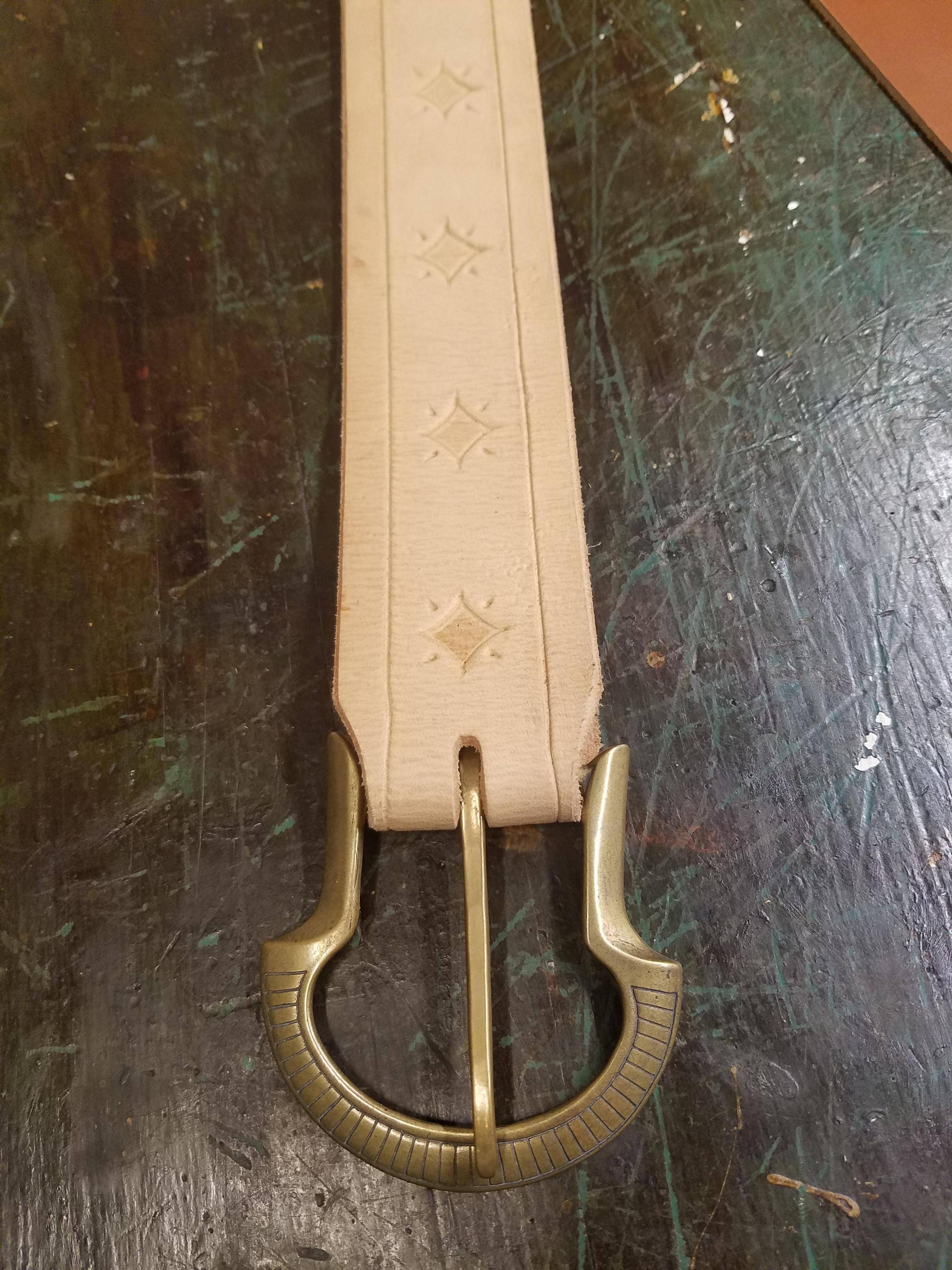 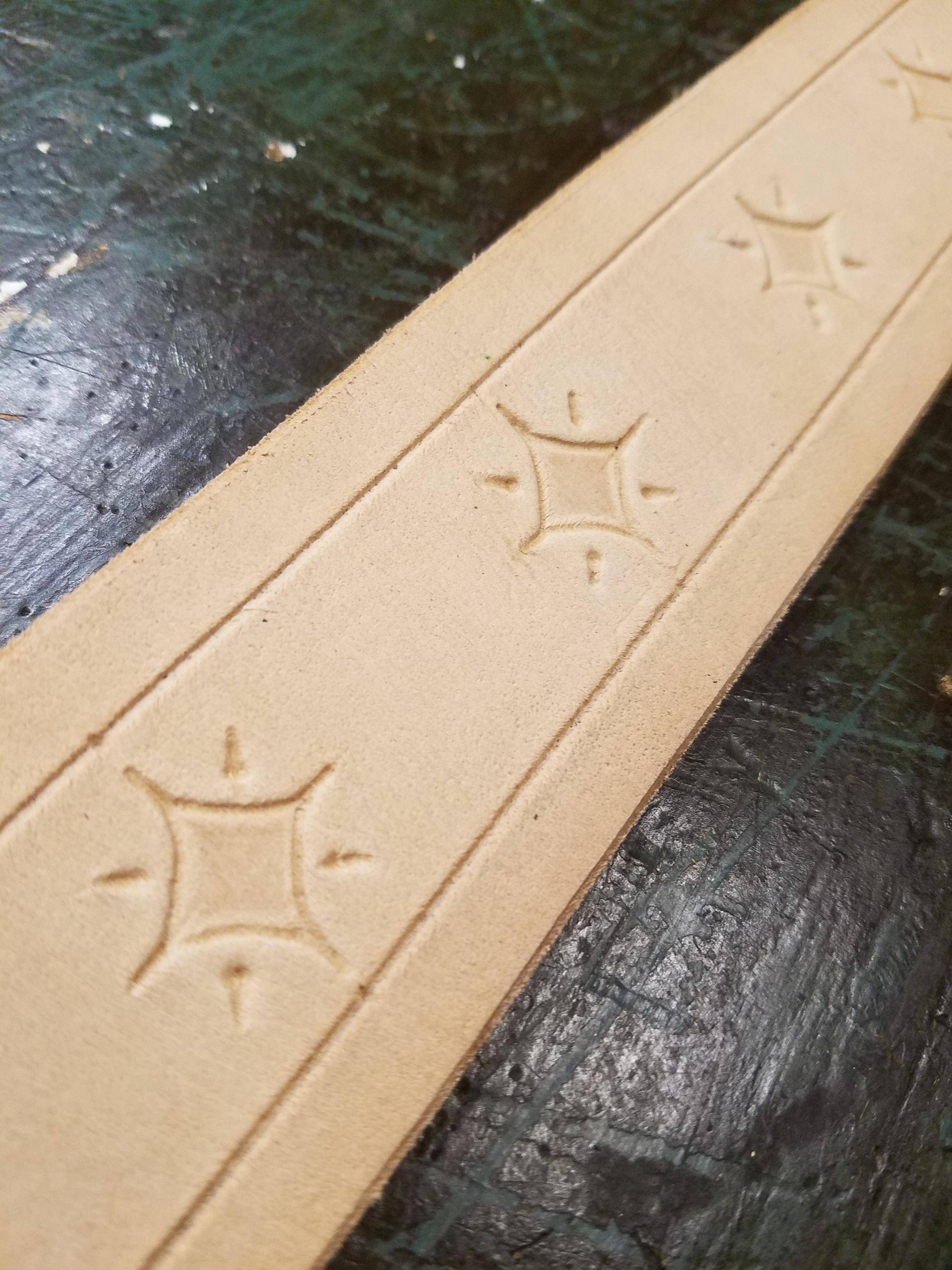 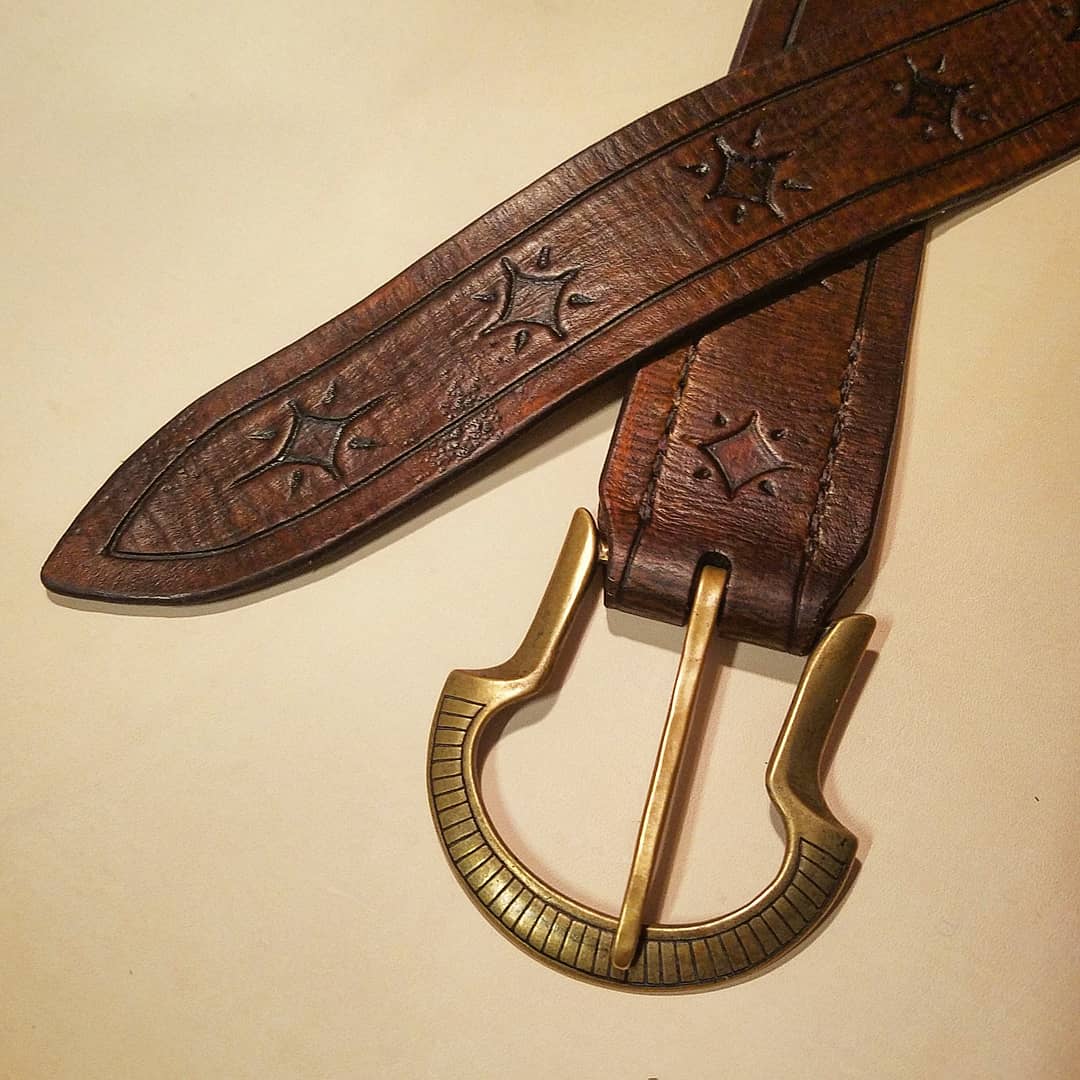 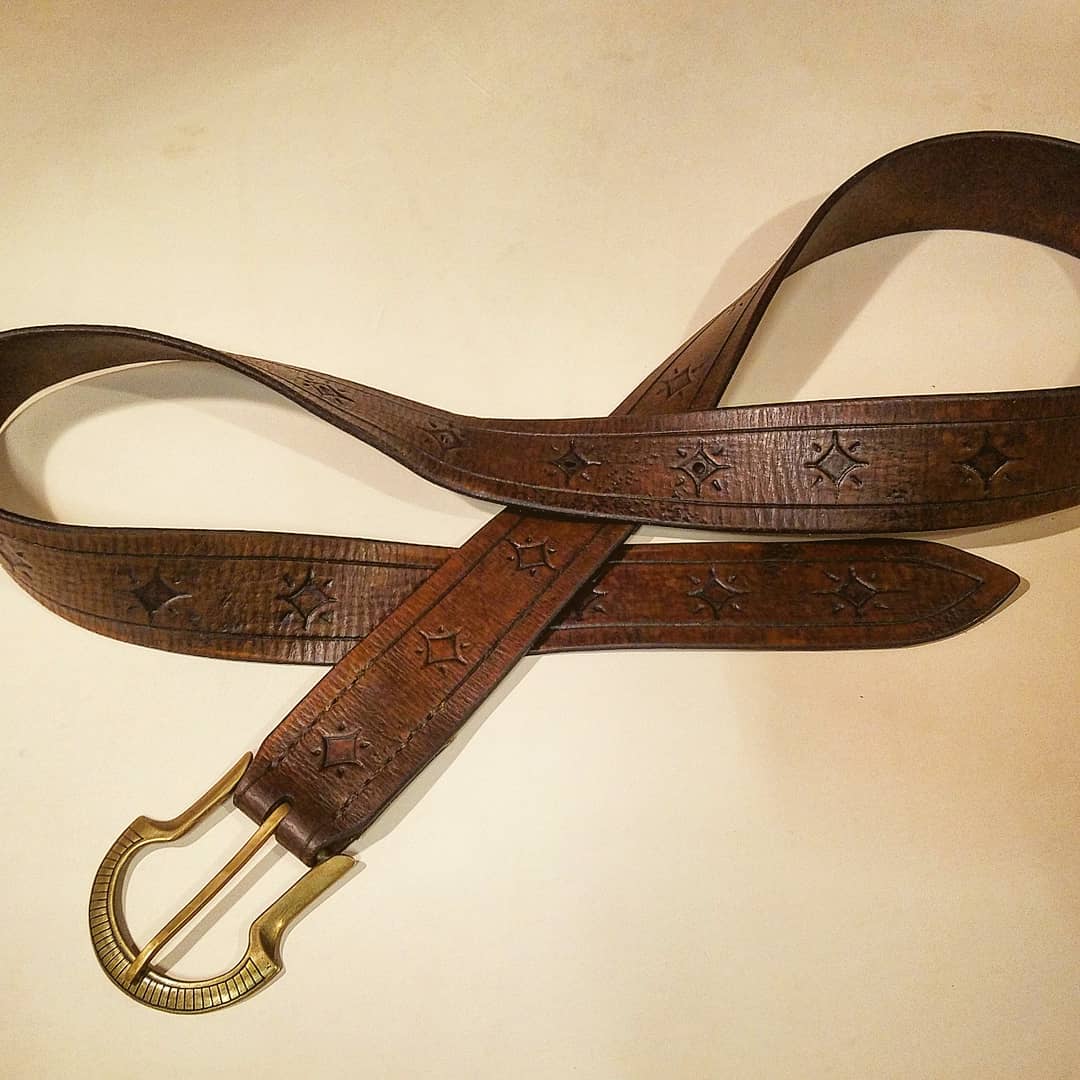 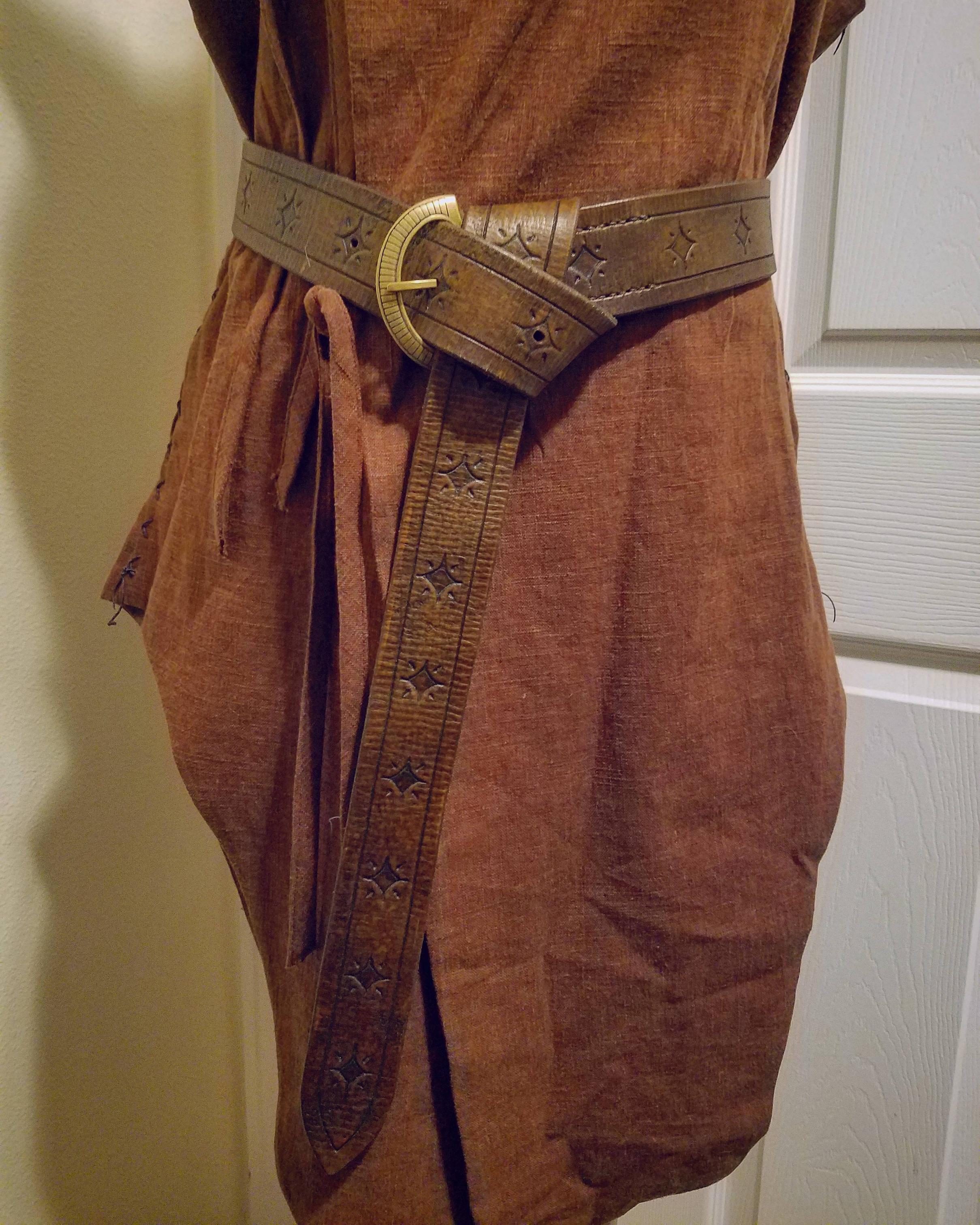 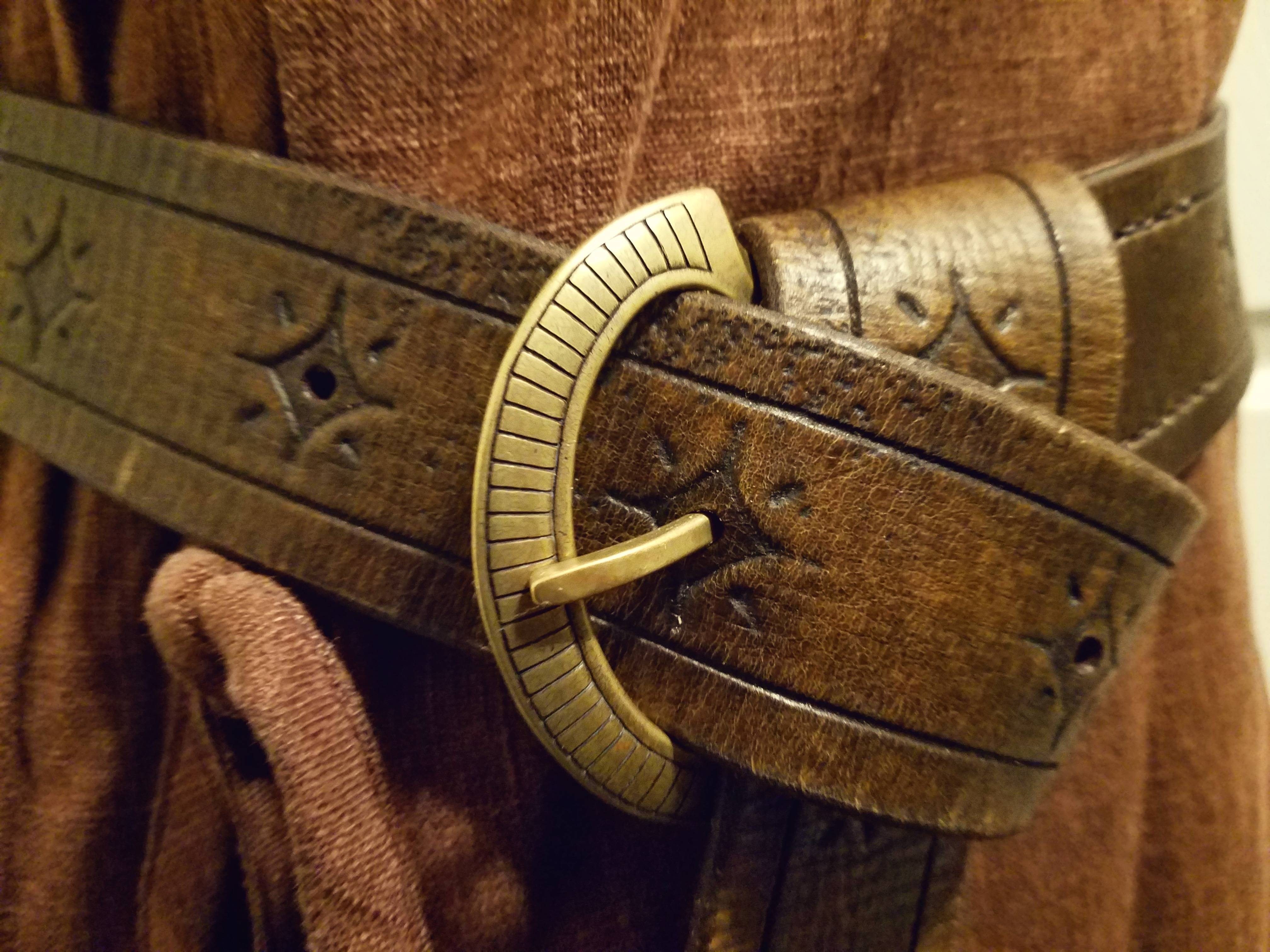 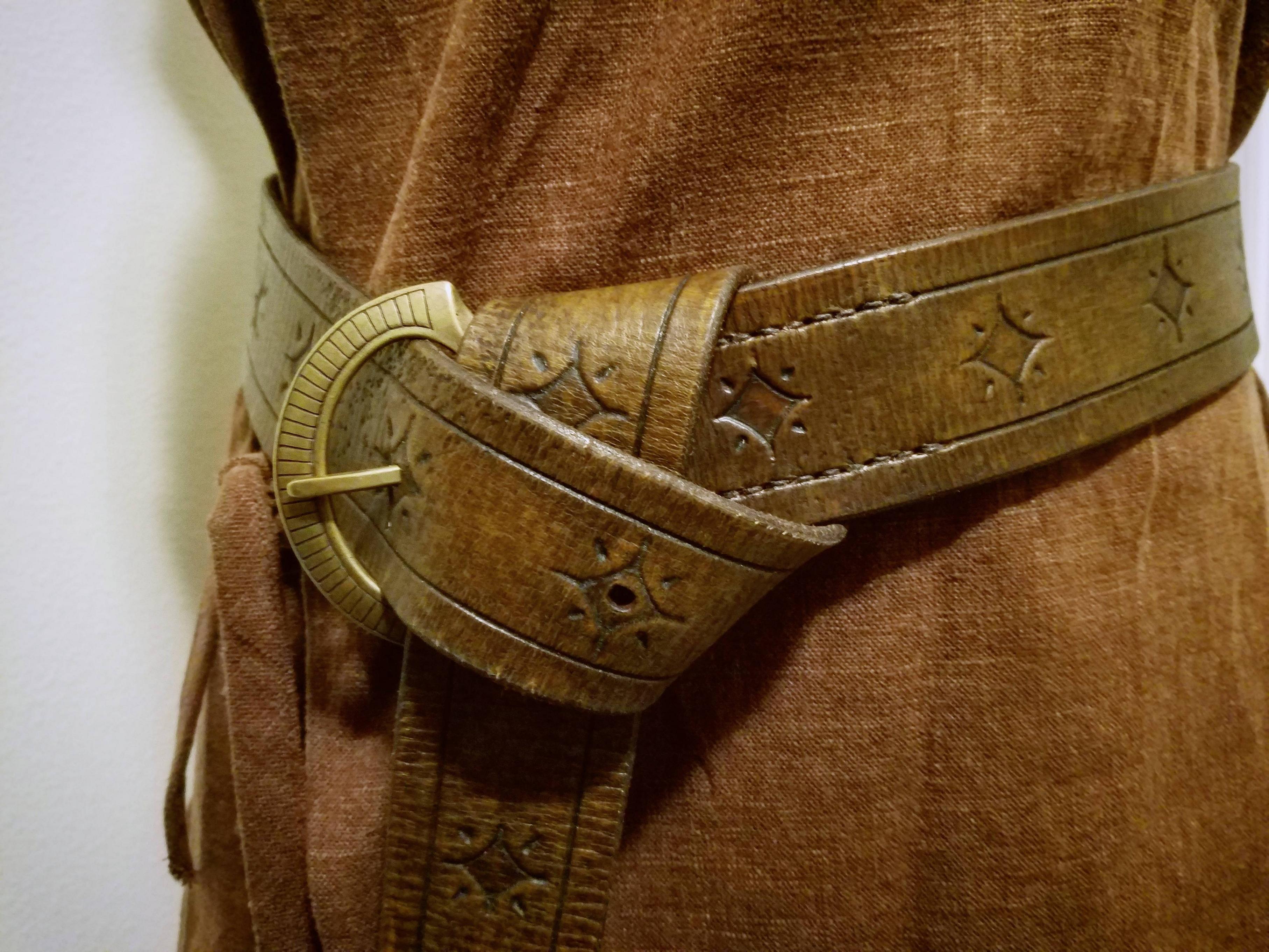 I'm going to steal your idea and pick up one of those large buckles from Viking... it's definitely got a ME vibe to it.

Love it. The stamping is great, you have a good eye for embellishments.
Top

This is amazing, and admire how well you make the leather look worn and old without spoiling the overall look, good job

Gimli: It's true you don't see many Dwarf-women. And in fact, they are so alike in voice and appearance, that they are often mistaken for Dwarf-men.
Aragorn: It's the beards.
Top

I saw your pictures on Facebook, but I just want to say again how lovely I think this is!

Some of the little touches just blow my mind, like the slightly extended star at the end of the strap and the fact that the holes for the buckle tongue are centered on some of the stars.

And like I said on Facebook, I think the decorations read "star" without screaming it, which is a difficult balance to strike!
- Ned Houndswood, Breelander
Richmond Fantasy-Inspired Hiking and Camping (on WordPress and Facebook)
Top

Thanks folks! I'm very fond of how this came out!

Yeah, that was definitely a concern of mine at first, because I've never had a ranger belt that wide, and when I think of big, chunky belts, I tend to think of pirates. But after trying this one on, I have to say it's not nearly as chunky as it seems, and the bit of extra width makes it quite comfortable (particularly since I've got a bit of extra natural padding in that area these days, and a thinner belt can sometimes cut across my belly in an uncomfortable way).

Taurinor wrote:Some of the little touches just blow my mind, like the slightly extended star at the end of the strap and the fact that the holes for the buckle tongue are centered on some of the stars.

HAH! I'm so glad you noticed those details! I was rather proud of those little things myself! They were done quite deliberately!
Top
Post Reply
9 posts • Page 1 of 1